I know what you're thinking. Okonomi-what? BUT you're gonna want to stick around, because this gluten free Okonomiyaki is something special.

I truly don't remember how I first heard about this traditional Japanese dish. I'm not sure if my sister (an avid anime and Japanese culture fan) first mentioned it to me, or if I read an article about it. Who knows?

Regardless, I was intrigued. Okonomiyaki is often described as a savory cabbage pancake. How could I not be interested? 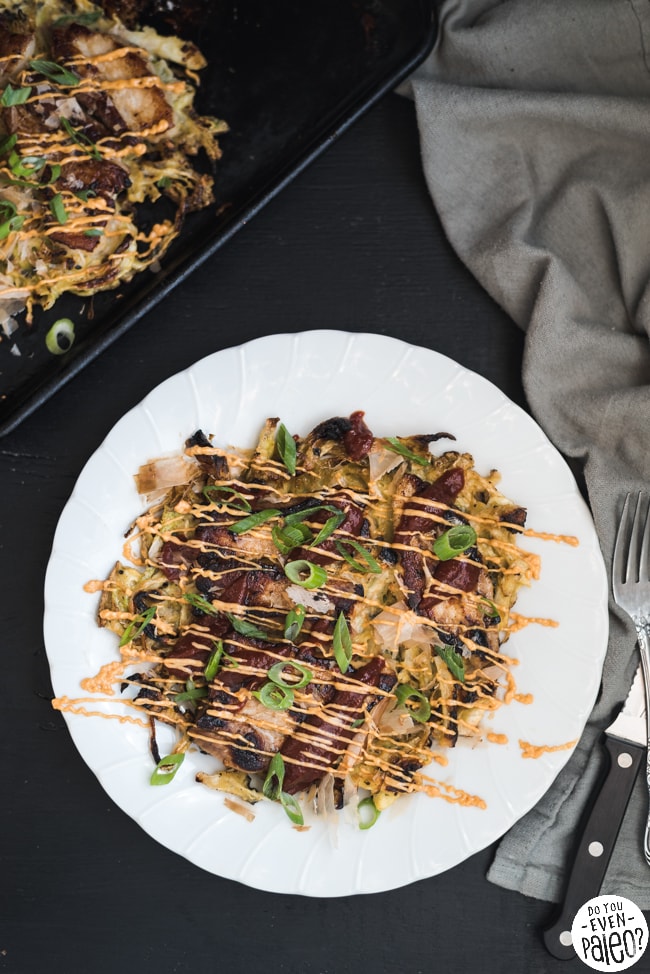 I wrote it down as something to research eventually, and more or less forgot about it. Until one day when a food-centric newsletter I get had a whole article about a couple from Japan who were starting an okonomiyaki food truck. Okonomiyaki is traditionally seen as street food... In some ways, sort of like tacos. The base is the same (the "cabbage pancake" part), but you can customize it in endless ways to fit the flavors you want.

Oh, and I haven't even mentioned the toppings yet! So. Many. Topping. Options. 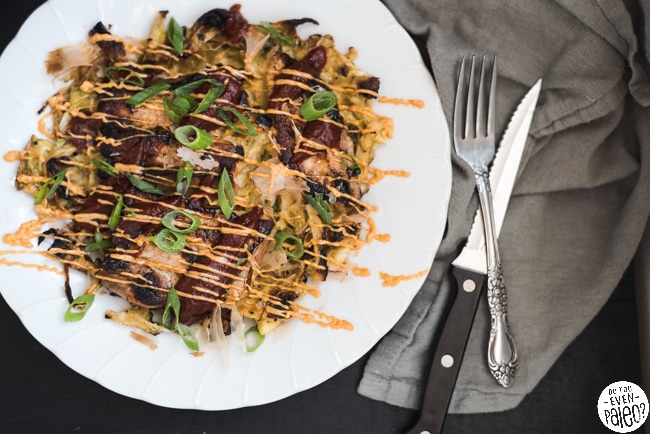 Anyway, I tried to keep things pretty basic for my gluten free version. Don't worry, I'll give you a bunch of tips to customize it based on your tastes.

I have to mention that true okonomiyaki uses grated Japanese yams. When grated, these yams essentially create a gelatinous substance that holds the pancake together. Yeah, I gave up trying to locate them in Fargo, North Dakota. Not exactly a mecca for exotic foods here! 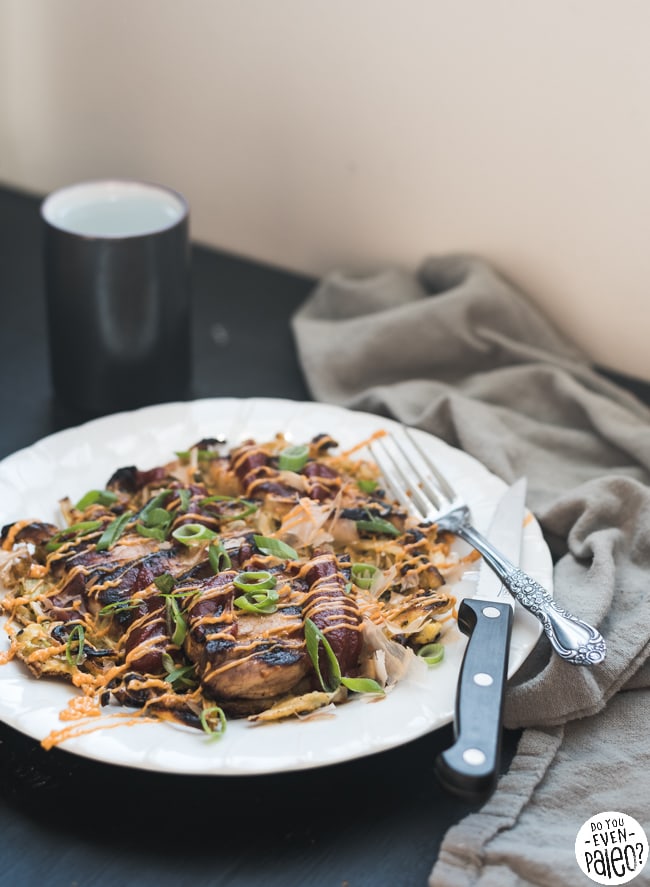 So no yams in this version. Instead, I rely on potato starch and eggs to hold the whole thing together.

Maybe I should have mentioned this closer to the beginning... But if you're not totally sold simply on how intriguing this is, let me assure you: This did not taste like I was expecting. I'm not sure exactly what I was expecting from a savory cabbage pancake... But good golly gosh was it good.  I mean, I ate three huge servings that first batch, and literally found myself craving more. 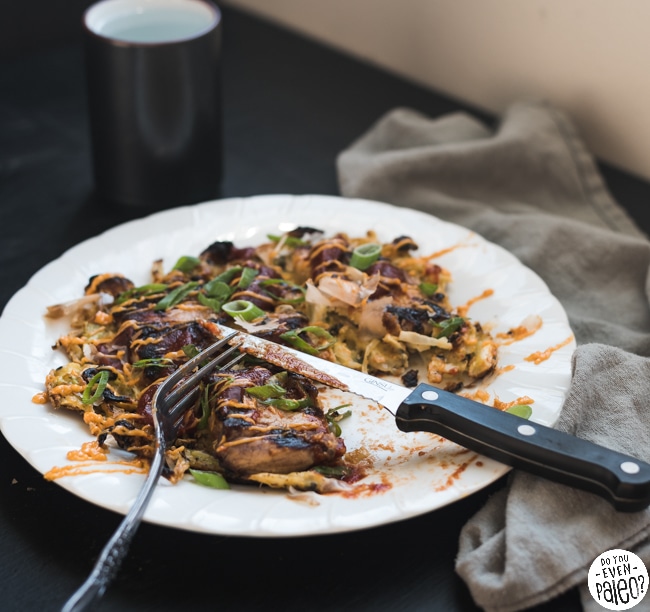 So. Try it. The ingredient list is relatively long, but there aren't many ingredients that are hard to track down. After all, we're starting with a base of cabbage, potato starch, eggs, and cassava flour! That said, don't skimp on the toppings and stuff. Omitting that would be like putting ground beef in a tortilla and calling it a taco. You need spices, toppings, etc. to really make this a drool-worthy meal!

Put Your Own Spin On It

You're always going to start with the same basic egg, potato starch, cabbage, cassava flour batter. But "Okonomi" stands for "what you wish", so feel free to customize it to your tastes! 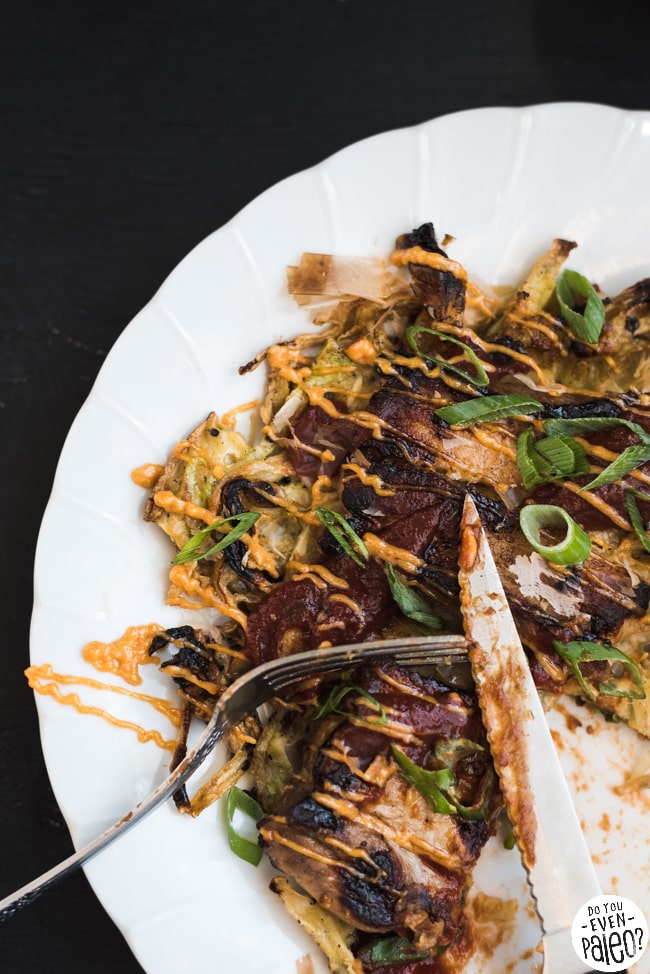 For the Mayo Drizzle