Just in time for summer...Raspberry Fudge Swirl Ice Cream is one of the many ice cream ideas birthed from a newfound dairy-free ice cream obsession (as mentioned in my coffee cashew ice cream post).

I'm fond of this recipe because it begins with the basics. You don't have to make the raspberry fudge swirl if you don't have the ingredients on hand. Without the swirl, you're left with a basic dairy free vanilla bean frozen custard. It's still rich and creamy on its own. Or you could add in your own mix-ins. Totally up to you.

So I've tried to make the recipe as detailed as possible, since you can use the ice cream base for so much more than a raspberry fudge swirl. 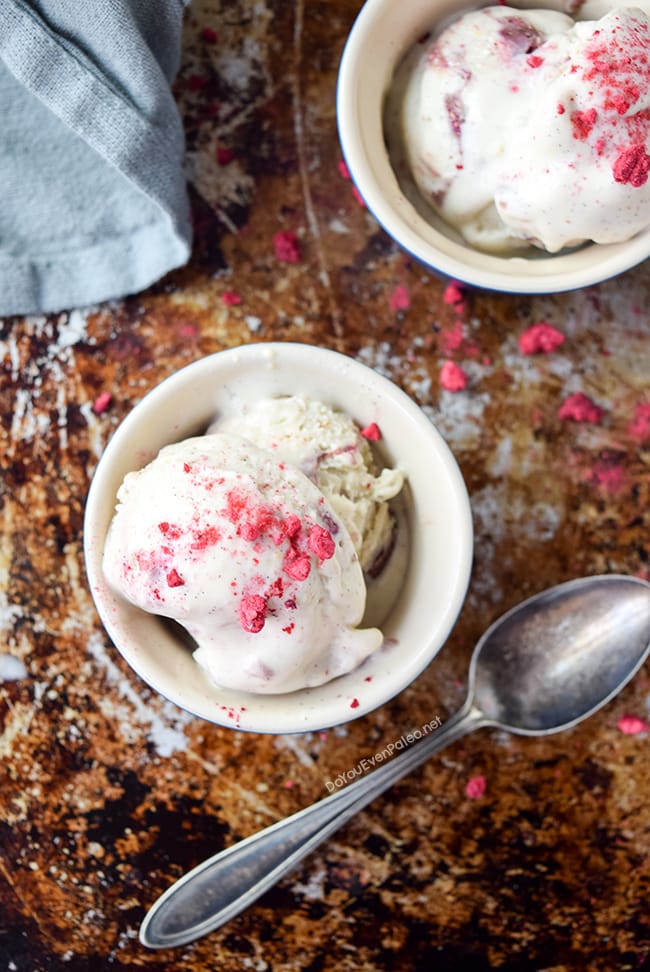 But I definitely suggest you give the swirl a try. The raspberry fudge swirl that I came up with uses cashew butter, so it doesn't harden when the ice cream is cold. If there's one ice cream pet peeve I have, it's when the mix-ins freeze into huge, hard chunks that feel like they'll break your teeth. I mean, little pieces are fine, but I don't want to feel like I'm biting down on a hunk of glass. No thanks. 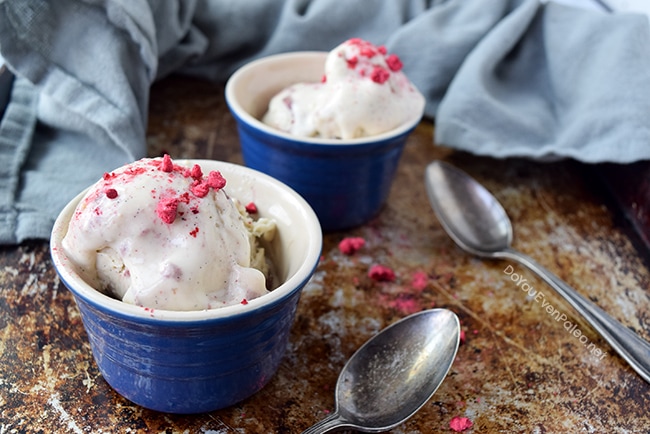 So when I came up with the swirl, I knew I couldn't use coconut oil or anything that solidifies when refrigerated as one of the main ingredients. The freeze-dried raspberry + nut butter combo worked amazingly. Lots of raspberry flavor without frozen raspberries. Hooray! 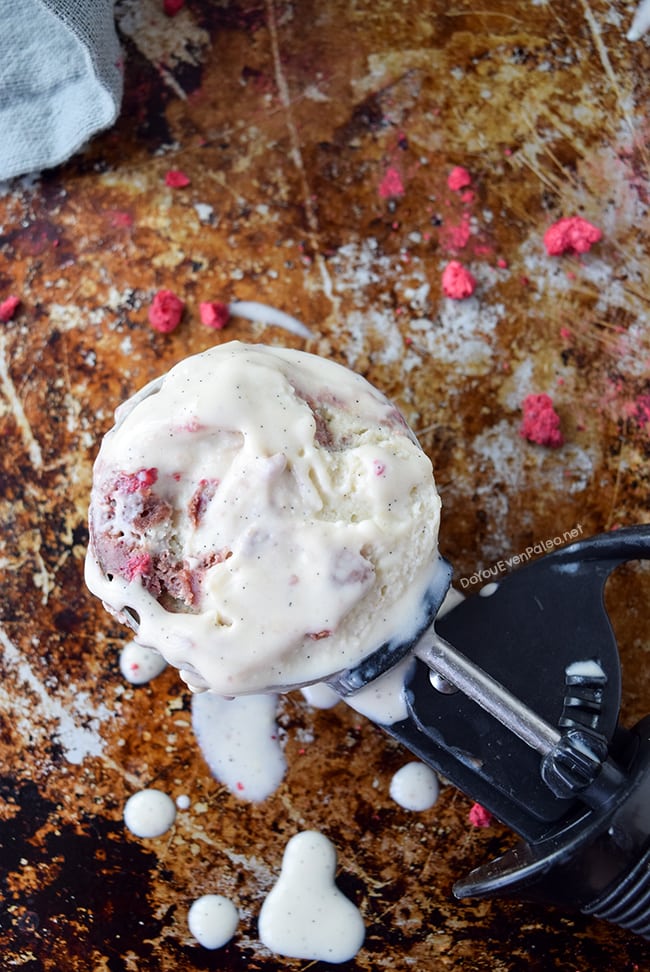 You'll notice that this recipe asks you to heat the coconut milk and temper egg yolks. I know, that's a lot of work for ice cream.

But we're talking about exceptional ice cream here. I'm not about that ice chip ice cream life. I want my ice cream to be creamy. And that requires tempering egg yolks.

Tempering eggs for the first time (essentially you're indirectly heating them so they don't curdle in heat) is daunting, but it's truly not bad. And I, for one, love learning new skills in the kitchen. It's another tool to add to my belt - it makes me more versatile. 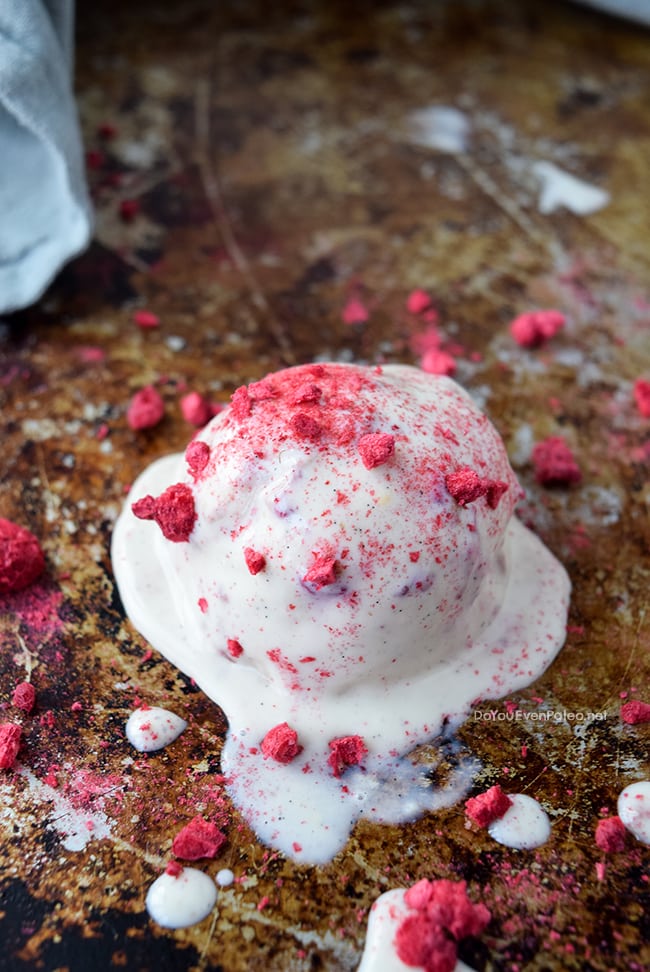 Now I'll admit that this ice cream isn't as thick and creamy as the cashew-based amazingness that is my coffee cashew ice cream. But, just like I mentioned above, I wanted to learn how to make ice cream in a new way and add a new skill to my repertoire. That's also why the base is a very simple vanilla bean ice cream...it's basic, and can be used for a variety of recipes.

But the raspberry fudge swirl ice cream isn't half bad! If you want something beyond your average ice cream, this is it. 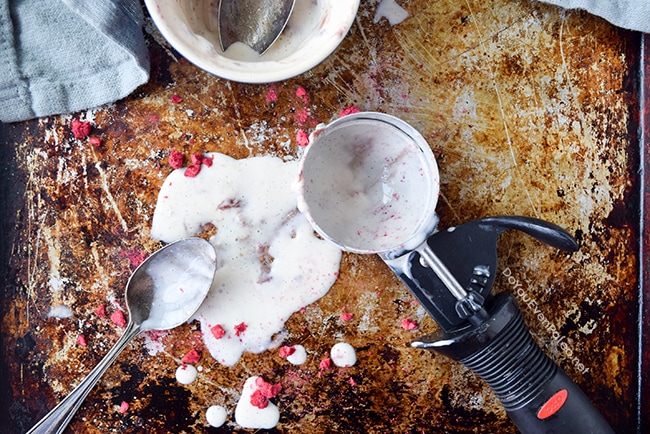 Just in time for summer: a dairy free and gluten free raspberry fudge swirl ice cream. Oh, it's paleo and vegetarian, too!

For the Vanilla Bean Ice Cream

For the Raspberry Fudge Swirl