Chill out during the hottest days with fresh, summery Shrimp Gazpacho with Avocado Relish!

Never had gazpacho? No worries. I hadn't enjoyed it until crafting this recipe, either. Essentially, gazpacho is a cold soup made of raw blended vegetables. 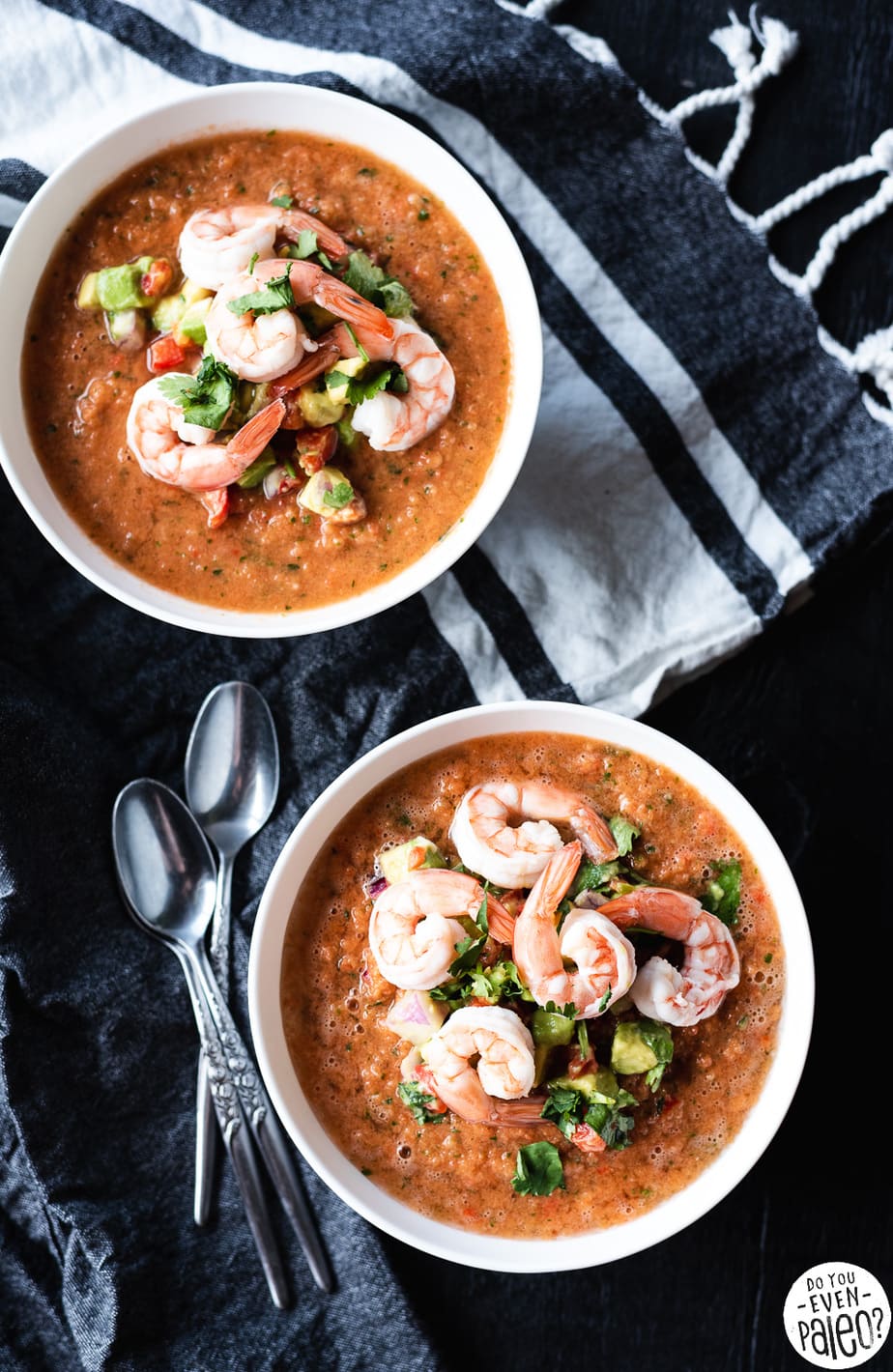 How to Make Gazpacho

Gazpacho originates in Spain. Endless variations exist, since you can customize the vegetables, amounts of vinegar and oil, and herbs used. The original version used stale bread as a base! But you won't find that here.

For this shrimp gazpacho recipe, I kept the soup itself fairly basic. 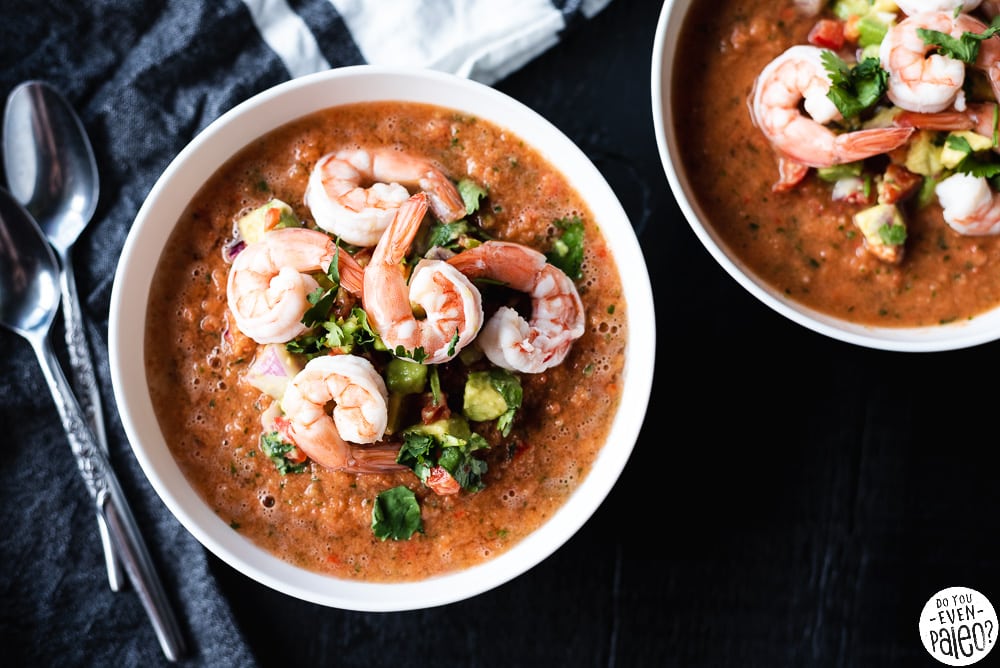 Tomatoes, cucumbers, and red bell peppers provide most of the bulk, color, and flavor.

Traditionally, gazpacho is smooth like a creamed soup. Obviously, you see in the pictures that my gazpacho isn't smooth.

I really wanted to showcase all the colors of the different veggies. You can see little flecks of the red bell pepper, green cucumber, and cilantro. I love that!

Ultimately, I think the smoothness/chunkiness of your gazpacho is entirely up to you. Want it smoother? Just blend longer. Easy!

Left a little more chunky like my pictures, the gazpacho almost reminded me of a blended restaurant salsa. Cool, refreshing, and tangy! 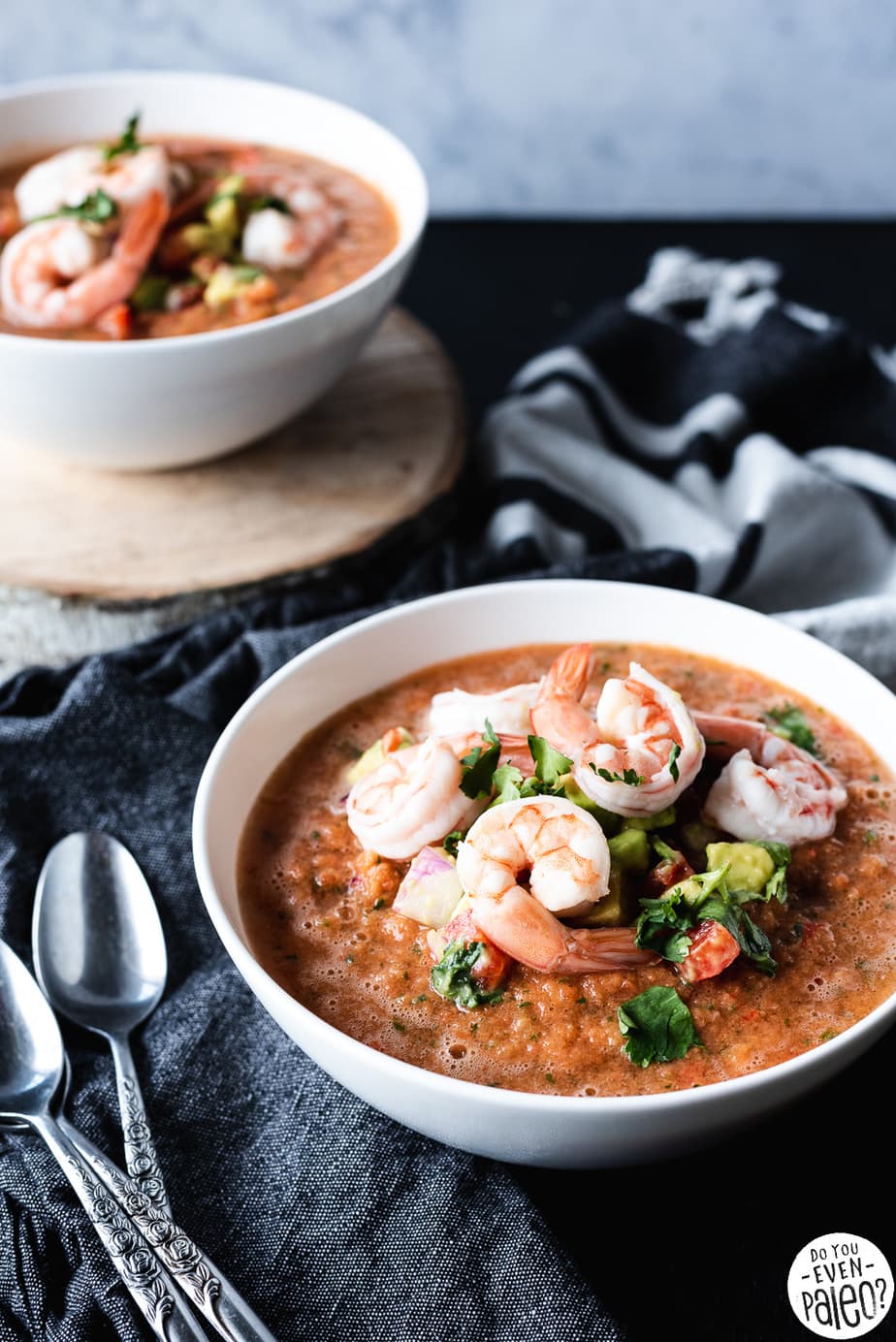 Shrimp rounds out the soup and adds some much-needed protein to this meal. Of course, you can leave the shrimp out if you want to, but that would be a shame.

Shrimp cooks super quickly, and it pairs oh so well with this blend of veggies.

I wouldn't skip the avocado relish, either. You can throw it together really quickly, and that avocado provides an interesting texture to the gazpacho.

I guess what I'm truly saying is don't leave anything out. Each part of this dish complements each other!

Feel free to load on that avocado relish. This recipe results in quite a bit of the simple topping — and trust me, that cool and creamy avocado truly adds something here. 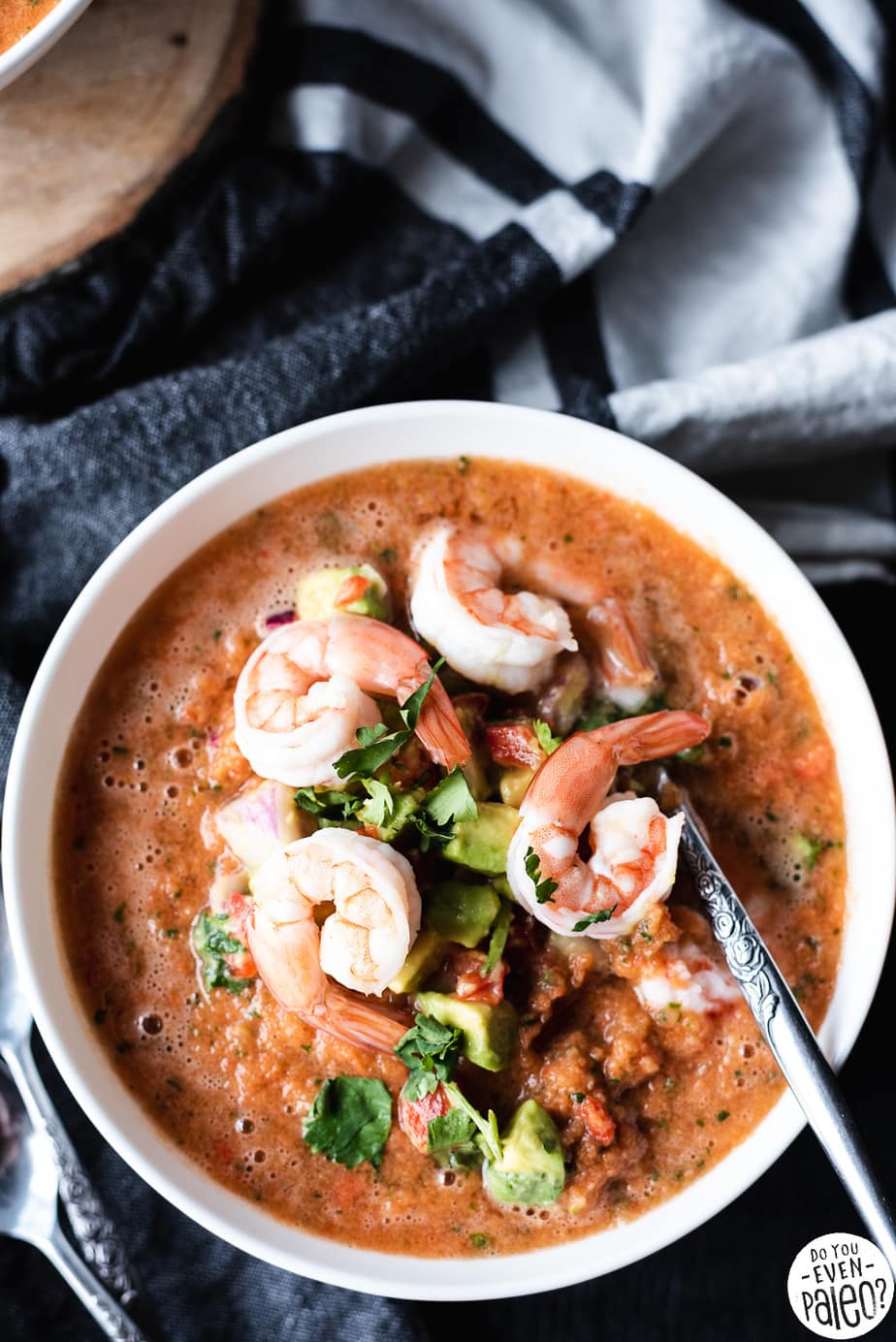 Summery Whole30 and paleo Shrimp Gazpacho with Avocado Relish makes a fast, simple meal for the hottest days of the year!

First, prep the tomatoes. Bring a large pot of water to boiling. Cut an "X" on the bottom of each tomato, just deep enough to break the skin. Add the tomatoes to the boiling water for 15 seconds to blanch the tomatoes. Remove and immediately plunge into a bowl of ice water.

Next, prepare the shrimp. Add the shrimp to the same pot of boiling water that you blanched the tomatoes in. Boil the shrimp for 2 minutes or until pink and no longer translucent. Drain and rinse the shrimp under cold water. Cover and refrigerate until ready to serve.

Remove the tomatoes from the ice water and gently peel away the skin. After blanching, it should peel away quite easily. Add the tomatoes, cucumber, red bell pepper, cilantro, red onion, lemon juice, olive oil, red wine vinegar, hot sauce, and garlic to a blender. Blend on medium-high until the soup reaches your desired consistency. Stir in salt. Chill the gazpacho in the fridge for at least an hour before serving. The longer it sits, the longer the flavors get to mingle and create magic!

For the smoothest gazpacho, peel the cucumbers and red bell peppers, too. 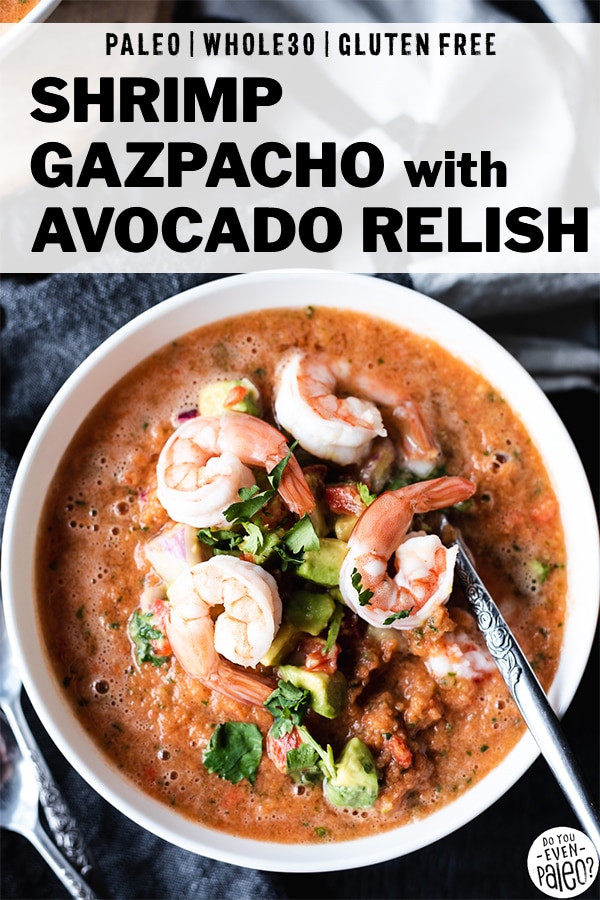